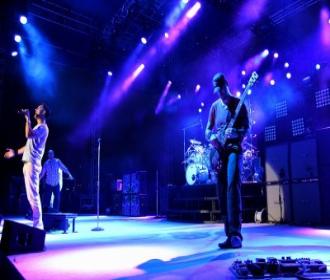 311 (pronounced "three-eleven") is an American rock band from Omaha, Nebraska. The band was formed in 1988 by vocalist/guitarist Nick Hexum, lead guitarist Jim Watson (who would later be replaced by Tim Mahoney), bassist Aaron "P-Nut" Wills and drummer Chad Sexton. In 1992, Doug "SA" Martinez joined to sing and provide turntables for 311's later albums, rounding out the current line-up. The band's name originates from the police code for indecent exposure in Omaha, Nebraska, after the original guitarist for the band was arrested for streaking